Interview with Comedian Will Noonan 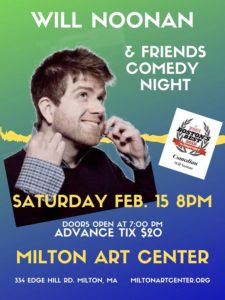 Milton native, Will Noonan was recently named “Boston’s Best Comedian 2018” by the Improper Bostonian magazine and is sometimes known as “The Honda Guy” for his current job as spokesman in Honda commercials on TV and radio all over New England. He has appeared at “Gotham Comedy Live” on AXS-TV, The Oddball Comedy Festival with Louis CK, Amy Shumer and Sarah Silverman. Will is well known for his internet presence, his Twitter account has over 12K followers and he is the creator and host of the popular iTunes charting podcast “High Pathetically with Will Noonan” available at iTunes and willnoonan.com.

You’ve arrived! What’s coming up for you this year that you’re excited about?

Well thank you for saying I’ve arrived! It’s way better than “departed”, so I really appreciate it. I’m really looking forward to 2020. My first movie “The Sleepover” will be premiering on Netflix. I’m only in it for 2 minutes, but I’m still calling it “my movie”. Also, we’ve been working on some funny new Honda commercials that I think people will really like.

When was the first time you realized you were funny?

I remember being around 7 or 8 years old at a cousins wedding and doing a Michael Jackson dance impression with all the grabs and moonwalking and everything and getting a big round of applause for my antics. I remember the look on my Dad’s face after was pretty classic. It was like “Where did that come from?”

I read that your years of working karaoke nights in NYC helped you learn crowd control, is that a learned skill or a facet of your personality that allows you to do this?

It’s hard to say. I do enjoy talking to people and the longer I did comedy the more comfortable I became talking with the audience. However, karaoke definitely taught me how to deal with drunks and it gave me a thick skin. When I started comedy and would bomb, I was already used to a room full of people resenting my existence.

Have you ever had an audience that that was difficult to connect with? How do you prepare internally to go on stage? Are you an introvert or an extrovert?

I would say one of the many things Kendrick Lamar and I have in common is that at times we can be “anti social extroverts”. I think I’m both introverted and extroverted, and that describes most artists I know. Probably one of the most annoying things about us.

Before I go on stage, I usually just like to chat with my fellow comedians. Maybe have some music playing or something. I usually know how I’m going to start and how I’m going to finish, and I sort of let the audience decide how the rest goes.

You host a weekly show at Capo in South Boston, is it hard to come up with new material every week?

Not really, Capo has become Boston’s Comedy Cellar and it’s absolutely the best place for professional comics to work on their new material. It’s a Monday; the audiences are smart and know that these comedians are “proven funny” and if a joke tanks here and there, that’s just part of how the sausage is made. As for myself, I may work on a joke there over the course of a few weeks, so there are a few plates spinning with different jokes at different stages of their development. Or if all else fails, I just talk to the band. 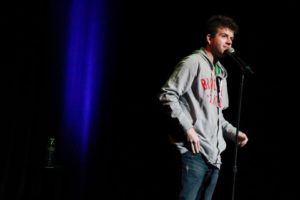 Tell us a story about what it was like growing up in Milton….  Do you still hang around with any of your Milton friends?

I think Milton may be one of the nicest places to grow up in America. I had no idea until I traveled all over the place how lucky I was. It has all the beauty of a small town, but it borders Boston. You can hike in the Blue Hills and see a Sox game in the same day without rushing at all.

And yes, I still hang out with my Milton friends, and I’m still in Milton all the time. My sister and parents live there, my best friends and their kids live there, and The Fruit Center is there and they have the best cold cuts.

What grammar school did you go to in Milton? Can you share a memory of funny moments in classrooms? Any comment from a teacher that you still remember?

I went to Cunningham School and have many fond memories of going there in the glorious 1990’s. Carefree, internetless kids, running around in neon jackets. They were good days. I probably drove a lot of my teachers crazy but they were all very patient with me. I can remember giving Miss Mullen a bag of “snake eggs” that was just a paper bag with a buzzer in it and she spilled her coffee on herself. She was cool about it though.

Who do you get your funniness from, your mom, your dad? Growing up what did you talk about at the dinner table?

Both my parents are funny as hell and I think I got different talents from each of them. My Dad is very funny with words and jokes and quick comebacks and my Mom is very funny with telling stories and doing impressions of people. The dinner table was very funny, and fast. My brother is a borderline genius and my sister is funny too, and as the youngest, I had to make sure I had something to say if I was going to say it. I’m sure my siblings would have made great comedians if they were into being poor.

Who inspires you? Who would you love to appear with next?

I’m inspired by a lot of people and it’s changing all the time. Comedically, Richard Pryor, Chappelle, Burr, Chris Rock, these are names I try and keep in my head. If I feel at all lost at sea comedically, they are the lighthouse. But I’m just inspired by any person that is a master of what they do. Chefs, musicians, writers, actors, athletes, even animals. Every time I see a dog sleeping, I think, “Man, I wish I could fall asleep like that.”

There are many people I would love to appear with, a list too long to even get near here BUT if it just so happens that Denis Leary reads the Milton Times, I wouldn’t mind a guest spot on Comics Come Home. I’ll bring donuts.