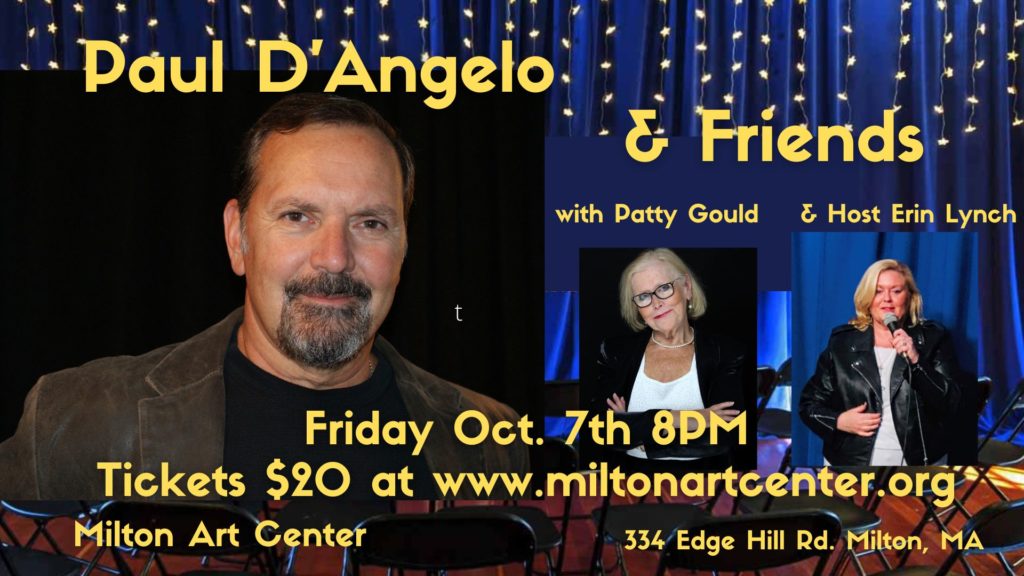 Doors Open at 7:30. There will be limited seating for this event. Get your tickets today!

Thrilled to welcome Paul D’Angelo to the MAC- originally scheduled to be at the art center May 2020… super happy we get to enjoy his performance now.

Paul Murphy spent eleven years as an assistant district attorney supervising several of Massachusetts’ busiest courthouses before becoming a successful criminal-defense trial attorney. The unexpected twist to this story is that, under the pseudonym Paul D’Angelo, Paul was simultaneously becoming one of the nation’s top stand-up comedians.
Paul has been headlining A-List comedy clubs around the country for 35 years and has been the opening act for over sixty internationally known recording acts, including Ray Charles, Aretha Franklin, Tom Jones, Tony Bennett, The Beach Boys, Chicago, The Four Tops, The Temptations, Jerry Lee Lewis, Huey Lewis & The News, Lyle Lovett, George Carlin, Joan Rivers and Dennis Miller….

Erin Lynch, our host, a local mom who started her comedy career at age 50. She takes her twisted view on life, marriage and family and shares it with the world whether they want to hear it or not!

Patty Gould opens, just back from the Portland Maine Comedy Festival and thrilled to be performing at the Milton Art Center. Patty, affectionately known as FPG, was born and raised in Charlestown.  You can take the girl out of the Town but you can never take the Town out of the girl! Patty has performed with Boston comedy legends throughout New England raising funds for worthy organizations and individuals in need since 2012. This glass half full, widowed, baby boomer will delight you with the tales of the 2nd act of FPG.